Evaluation of a supply side of public transport using GTFS data.

The aim of the study is to evaluate a supply side of public transport. The assumption that lies behind this study is that it should minimize the amount of data required and to guarantee its fully replicability. The result is a set of indicators which enable to evaluate public transport network in a given area and easily compare the results between different cities, functional urban areas (FUA) or metropolises, including international comparisons.

The presented example uses an example of Madrid.

Three different types of data are used in the study:

The evaluation procedure is divided into three main parts, preceded by an overview of available (or colleced) GTFS data:

Before the evaluation, there is a need to revise a basic spatial and temporal information about all available feeds for a given case study. A map shows a spatial range of all available GTFS feeds comparing to the city and FUA limits.

The table provides information about the names and temporal coverages of all feeds in order to confirm that they cover the same period of time. It is also used to select a “typical day” for further analyses (different feeds contain a calendar data coded in a different way, thus a selection of one day is necessary in order to avoid a double-counting of particular trips and/or departures). In this example, based on the data shown in the table, we focus on a “typical working day”: 2018/09/11.

First part of the evaluation focus on a description of public transport network, its spatial pattern and accessibility. The table summarize basic indicators of the network using all available GTFS feeds, providing insights about existing transport modes, number of stops and total number of the departures during the selected day.
Note: due to different systems of coding of calendar, departure times and frequencies. The table provides unified information, regardless:

Finally, apart from the division by transport modes, the table summarize differences between the city within its limits, FUA and the whole GTFS dataset(s). 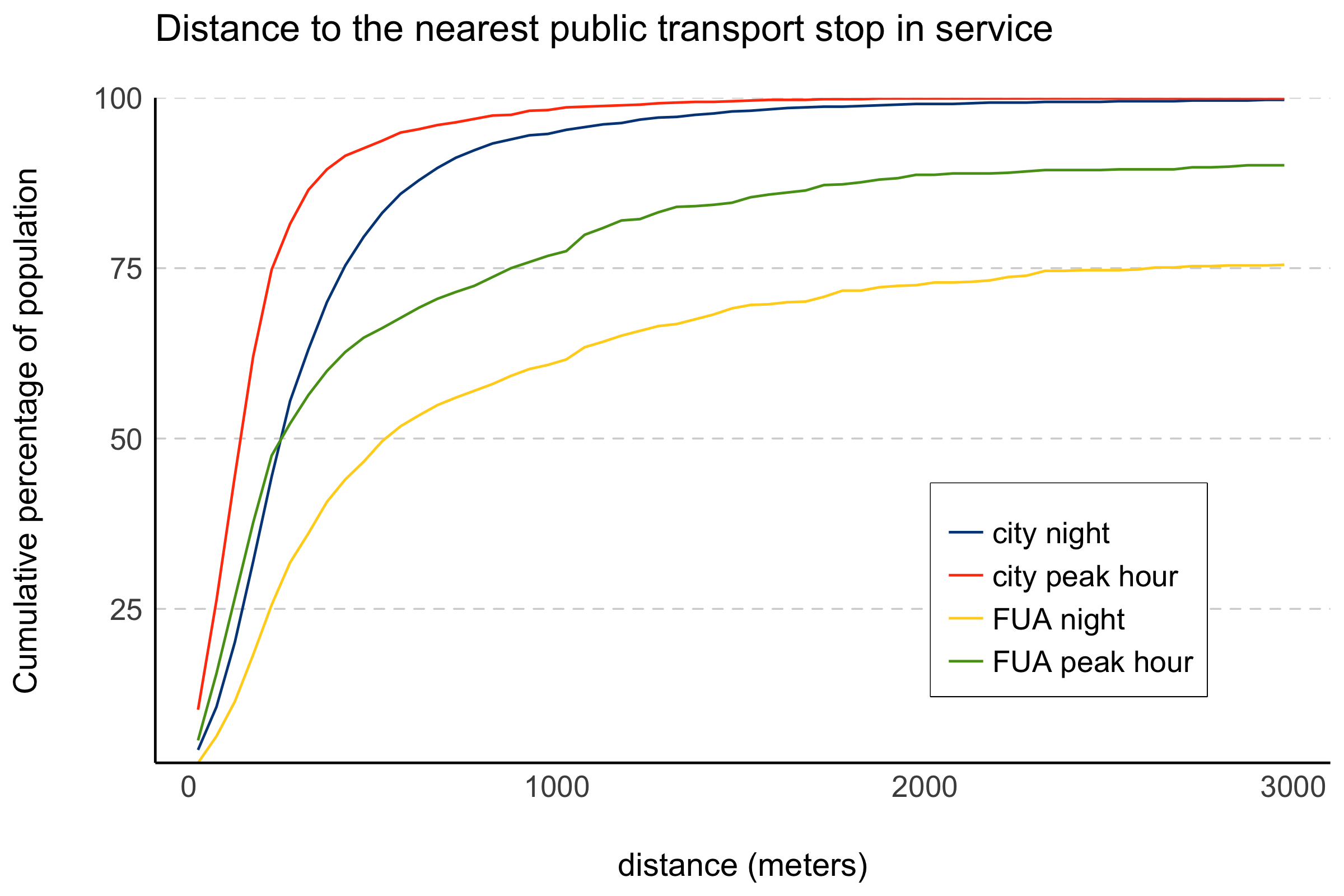 The frequency of public transport differs in a course of a day, in line with peaks and valleys of density of human mobility: more departures take place during peak hours, less in out-of-peak period and much less during the night. Each city or each country has its own curve of daily changes of frequency. Nevertheless, it is important to properly identify periods different frequency, especially, when doing international comparisons. These differences are visualized by the graph presented below. Note, that y-axis shows a total number of departures and not frequency - the latter would be difficult to visualize as there are changes in e.g. number of lines. Moreover, some differences in frequency patterns may occur between a city and its FUA, so both patterns are presented simultaneously. Additionally, it enables to check what share of departures in the all FUA are realized within city limits and how it changes during a day. 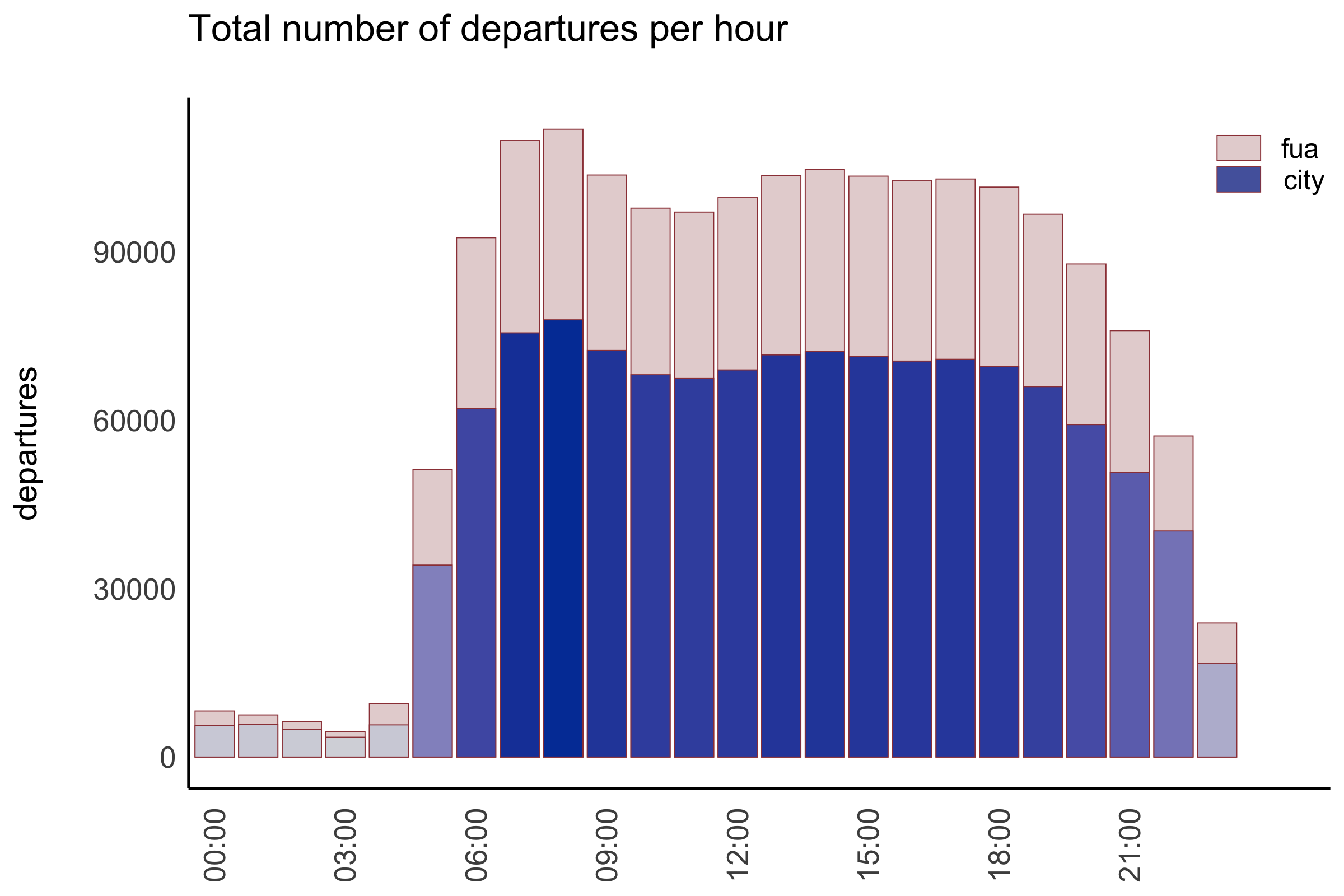 Regardless the number of stops, lines, departures etc., the most important function of public transport is to enable people to reach their destinations. Thus, the most important indicator which evaluates public transport network is a level of accessibility which offers this network. In this example, a potential accessibility is used, with the number of population as a proxy of destination’s attractiveness. This indicator includes relations between all pairs of origin–destination nodes in a given area and it assumes the greater importance of larger centres than smaller ones and the diminishing attractiveness of more distantly located destinations and it is expressed by the following formula.

where $A_i$ is a potential accessibility of a zone $i$, $g(M_j)$ is the function of destination attractiveness of a zone $j$ (e.g. number of population1), and $f{(t_{ij} )}$ is a distance decay function. In a given example, a negative exponential is used as distance decay function, with $\beta = 0.0223$ (i.e. a destination loses half-value of its attractiveness at 31 minutes travel time).

1 we use number of population due to the fact that population data are the most broadly available in high resolution datasets.

The results are presented as a set of maps which compare level of accessibility during the day (peak hours) and night and they are presented in a high resolution level of 1km2 grids. Map for FUA are accompanied by zoom-in maps limited to the city area.

The last graph compares a share of population which has a particular level of accessibility (as a relation to the highest possible value measured in during a day). 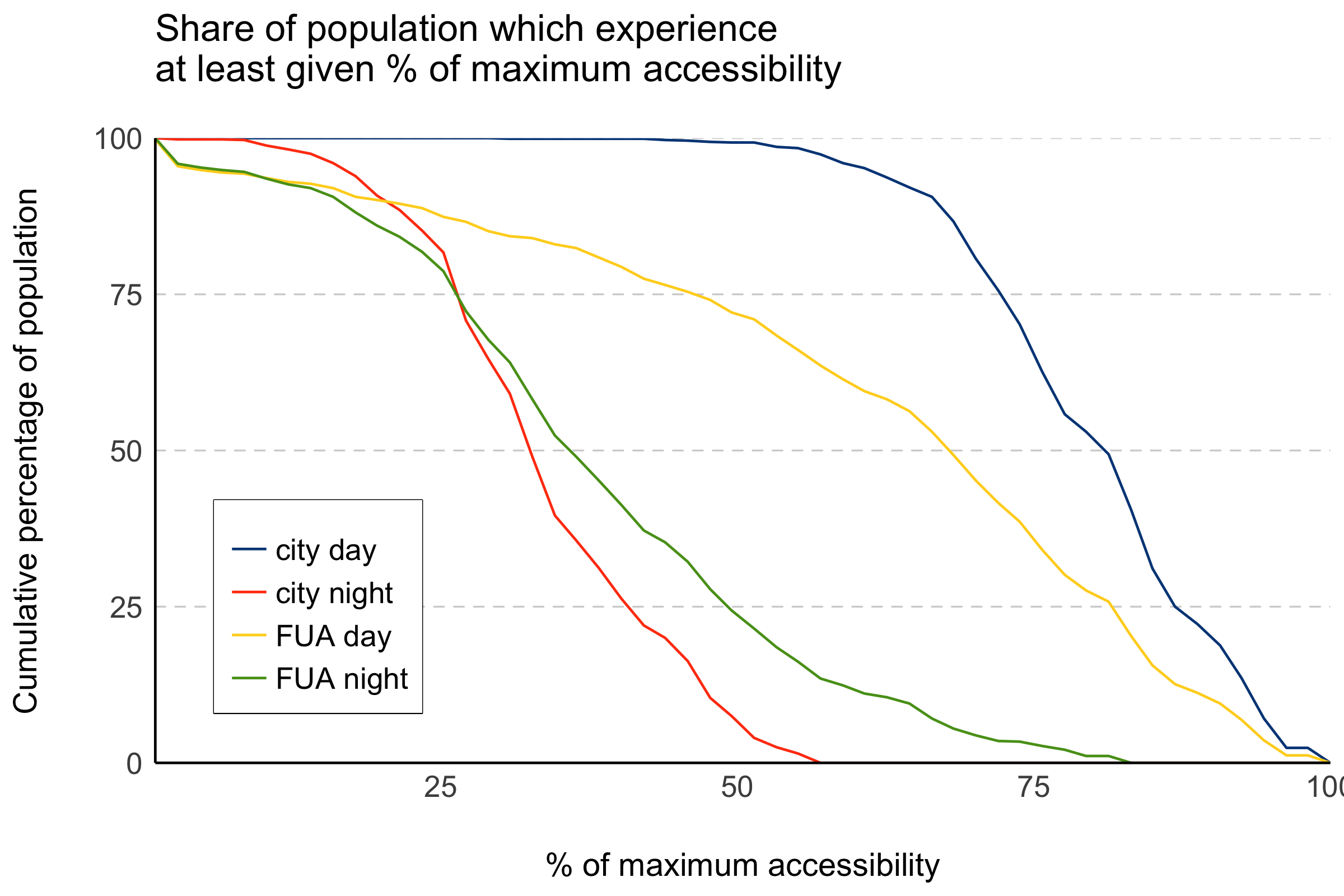 This study was prepared in collaboration with:

I am transport and urban geographer interested in accessibility analysis, GTFS data and R scripts.