The section provides list of links to all #rstats code repositories developed during the project lifetime.

Note that repositories will be consecutively shared along with the publication of the results.

The code was inspired by Owen & Murphy (2018) paper and was prepared for the study on impact of temporal resolution on on public transport accessibility measurement (Stępniak et al., 2019).

The output of the function is a .dbf file which contains generated departure times (to be used e.g. in ArcGIS Network to calculate origin-destination matrices with time-dependent transport data, e.g. GTFS). The structure of the output file:

Details about the function syntax an example of its application can be found in repo description.

Link to the repo: Temporal paper

Detailed description of all scripts, workflow and description of inputs and outputs of particular scripts can be found in repo´s README file. All the data used for the study can be downloaded from Open Data Repository RepOD. Direct link and reference of the dataset:
Stepniak, M., Goliszek, S., Pritchard, J., Geurs, K., 2019. The Impact of Temporal Resolution on Public Transport Accessibility Measurement. [Dataset] RepOD. https://doi.org/10.18150/repod.7727991

This code is used for the study policy support tool

Link to the repo: GTFS moveVis

The code was prepared for the Researchers Night 2018 in Madrid and it was used to illustrate public transport flows in Madrid (metro, trams and suburban trains) during the morning peak hours. Data source: Consorcio de Transportes de Madrid).

The repo consists of two parts: first coverts data derived from a GTFS feed in order to meet the requirements of the moveVis package. The second part creates a video showing a movement of public transport vehicles using `moveVis´ package.

Note that since new version of moveVis package is available, with completely rewritten code and introduced a new logic and new functions, the code is likely depriciated. For the details consult the moveVis official webpage

The output is presented on the video attached below. 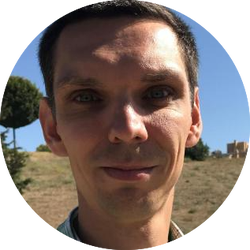 I am transport and urban geographer interested in accessibility analysis, GTFS data and R scripts.